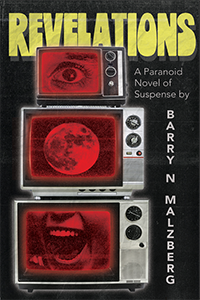 Paperback, 3rd edition, 180 pages
Published April 2020 by Anti-Oedipus Press
I have never reviewed a book twice in twelve months before but Last July when I picked up the second edition of this book to read it I had no idea that Homey of our podcast D.Harlan Wilson was planning a new re-issue of it through his amazing imprint Anti-Oedipus press. I had wanted to read the book because Malzberg talked about this book often in the interview we did with him for the Dickheads podcast (link below)

I am glad this book got re-issued giving me cause to give it another look inside. I know the first question for you huge Malzberg fans, and there are a small but loyal bunch of you weirdos out there. If You have the second or first edition is there a reason to pick up this edition?  Besides that amazing cover.

Yes, yes, yes. There are several reasons to pick up the AOP edition. First and foremost is the idea that having Malzberg back in print is important. While Philip K. Dick finally got the respect he deserved after his death, AOP is making sure we don't miss the chance to honor Malzberg while he is still very much with us. While nowhere near the recognition Malzberg deserves AOP re-issues of Beyond Apollo, Galaxies, and The Falling Astronauts and now Revelations make up a thematically linked series that is as fun as they are important.

Second, the new introduction and afterwords are excellent and insightful. The introduction is a middle finger piece written by D.Harlan Wilson. The message of the introduction is that Science Fiction is dead and a product native to the 20th Century. I am sure Malzberg enjoyed the message as he has made clear he has no love for modern science fiction. I am not sure I agree with the message but along the way, Wilson gives a great history of the 60s new wave of science fiction and Cyberpunk that includes where Malzbeg fits in.

The book includes the second edition afterword and a brand new one. While it is short it is very insightful, I don't want to give it away but it is heartfelt. It is funny that the 1976 edition was a "Rediscovery" edition five years after it was first put out. So now this is re-rediscovery, and it is great that we get to hear from the author. He is reacting to the comparisons this novel rightfully gets to the Oscar-winning film Network.

This is an interesting Malzberg novel and it is the middle book in an unofficial series that he wrote that was intensely critical of the modern (at the time) space program. This series of books started with his attempt to write a mainstream Science Fiction novel with Falling Astronauts and went gonzo in the end with Beyond Apollo. On the surface, it seems that the focus of this novel is not the space program but a TV show that gives the book the title. Revelations is a Jerry Springer-ish show years before that circus was a thing.

The host in this show Marvin Martin interviews people one on one and the show is about exposing their twisted and perverse secrets for ratings. This is an interesting set-up for a near-future sci-fi novel the drive is the author's passion at the time for questioning the space program. Malzberg told us during our Dickheads podcast interview that he didn't like the unrealistic boy scout imagine that NASA and government portrayed of the astronauts.

Malzberg argues that played a role in the downfall of the space program.  That the image was one the world couldn't relate to as society changed in the late '60s. The Rediscovery edition with BM's afterword was published in a curious window that afforded the author to take a victory lap when the novel appeared to predict the demise of the NASA space program during that window between Apollo and the space shuttle. Of course, NASA would rebound with the shuttle and the far more important work of the Voyager probes. The story-line of Walter Monaghan a former moon traveler was a distraction from the most interesting aspects of the story. To me, I wanted to know more about Hurwitz the producer of the show, and the host Martin. The way mass media turned misery into profit was something Malzberg nailed more than a decade before the gotcha TV shows were a big deal. That said Monaghan's story was the theme Malzberg was strongly dealing with.

It is all done with the aspects you expect from the gonzo new wave sci-fi authors. Paranoid unreliable narrators, sadistic psycho-sexual manipulation, horrible political realities, and much much more. This is a quick read, and while I know the author considers it one of his best I didn't enjoy it as much as Beyond Apollo, but this edition is important. I think I will make a point to put all the AOP editions on my shelf.

Check the interview I did with Barry last year for Dickheads. He talks about this novel several times.
Complete Dickheads Podcast Malzberg interview
Posted by David Agranoff at 9:40 AM