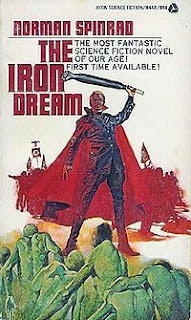 The Iron Dream by Norman Spinrad
Paperback, 255 pagesSF rediscovery series #5Published October 1977 by Avon Books (first published 1972)
This is a really weird book to review. This is a deeply weird and misunderstood book that is both a work of genius and a steaming pile of shit at the same time. I mean Norman Spinrad who wrote it is the underrated genius and he knew full well that he was was taking a literary dump.
It is one of those ideas punk rockers have all the time it is very much like when band dudes sit around and say "wouldn't be hilarious if we did this insane band that pissed people off". Some remain jokes like the Anthrax guys doing Stormtroopers of Death sometimes they become serious bands like Vegan Reich and Racetraitor. (Look them up ) Anyhoo Norman Spinrad if you don't know is a progressive anarchist science fiction writer who in the early '70s was living in England. He and his friend editor and author Michael Moorcock were talking about how you construct a Sword and Sorcery novel. It occurred to Spinrad that the very nature of pulp sci-fi in the era was in need of a little satire, well a very big satire.
The really weird thing is that most satires are funny, they operate with tongue in cheek and are fun. Sci-fi has a long tradition of the humorous satire from Pohl and Kornbluth's Space Merchants, Vonnegut, and probably most famous in Douglas Adams Hitchhiker's Guide to The Galaxy. Plenty of Sci-fi satire is laugh out loud funny but this satire is played very seriously. The idea was what if Hitler wrote a space opera?
Spinrad once said "There is something deeply disturbing in the congruence between the commercial pulp action-adventure formula and the Ubermensch in jackboots"  It is a deeply serious story in the eyes of the author Adolf Hitler, you see inside the Iron Dream is an experiment of alternate history with a novel inside it called Lord of the Swastika and Spinrad wrote it imagining that Hitler had become a pulp Sci-fi writer and not an evil dictator.
How interesting for a Science Fiction writer, who would twice serve as the president of  SFWA  to blister the genre with such a scathing meta commentary but it is genius in many ways. The problem is the Hitler novel is a slog and tough read. Hitler even with help from Spinrad is a terrible sci-fi author. As interesting as the meta-commentary is the Hitler novel is damn awful. I mean it was meant to be a fascist fantasy of a dying madman. In this history, the Nazi party fell apart and Adolf like many Germans immigrated to New York where he became an illustrator and a sci-fi writer with a cult following. In this fake history, Hitler died soon after writing the novel and was given the 1954 Hugo award (That in our reality that went to Bradbury for Farahenheit 451), and fans cos-played his thousand-year Reich at sci-fi cons.
So yeah Lord of the Swastika is a terrible novel but the Iron Dream is a complicated work of genius bound to confuse those who don't look past the surface. It is purple prose dialed to 11 on the juvenile fascist machismo scale. The thing is it is intentional and Spinrad commenting on the genre of pulp adventure like Robert Howard is totally savage and great.
Spinrad said "What drew me to write it was that the economic and political reasons for the rise of Nazi Germany never convinced me. Hitler was a media genius, and Nazism a psychosexual phenomenon. … Like a certain species of “heroic fantasy.” Hitler was a big fan of Wagnerian Opera at a time when “Space Opera” had a big fandom too."
So you see The Iron Dream is 2-star read, a 5-star experiment of political satire and that leaves me feeling it should get a 4-star average. The novel ends with a fictional afterword about Hitler and a very critical review of the novel. In many ways that is all you need to read. This message would probably have worked better as a novella or a short story - with Fictional biographical parts of Hitler's alternative life mixed in.
That would have been easier on the reader but it would have hurt the point Spinrad was trying to make. This is a bitter pill and it is going to taste bad going down. It has too. There is a key point on the last page of the essay it is the most important point.
“For Feric Jaggar is essentially a monster: a narcissistic psychopath with paranoid obsessions. His total self-assurance and certainty is based on a total lack of introspective self-knowledge. In a sense, such a human being would be all surface and no interior. He would be able to manipulate the surface of social reality by projecting his own pathologies upon it, but he would never be able to share in the inner communion of interpersonal relationships. Such a creature could give a nation the iron leadership and sense of certainty to face a mortal crisis, but at what cost? Led by the likes of a Feric Jaggar, we might gain the world at the cost of our souls. No,”
Dickheads Podcast episode recording soon should be out before July. Stay tuned...
Posted by David Agranoff at 9:11 AM