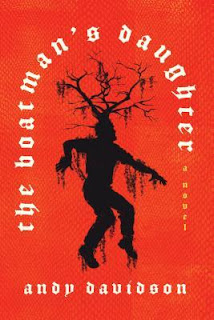 In 2017 Andy Davidson's In the Valley of the Sun inspired many well deserved hyperbolic reviews from readers such as myself. In 2017 It was my second favorite only behind Chad Stroup's Secrets of the Weird. Many reviewers were hailing Davidson as the next big discovery. I think the horror genre had not had such consensus on a debut since Nick Cutter's the Troop. I was not above it in my review I said it was a  "southern Gothic that is like the movie Near Dark if it was written by Cormac McCarthy. The official statements by the publisher makes that Macarthy comparison as well as Joe Hill and Anne Rice. Hill sure, but Anne Rice not so much for me. Hell, I see more in common with True Detective writer Nic Pizzalto's books that any of those three."

I am aware comparisons to Cormac McCarthy could cut two ways. He is the master of the Southern gothic dark narrative while writing gorgeous prose. All those things could and will be said of Davidson. His novels are more direct horror than anything McCarthy ever did. I know those who define horror as narrow as possible don't consider Blood Meridian or Child of  God horror but no mistakes will be made with Andy Davidson.

I hesitated to talk about this in my review of In the Valley of the Sun, but I don't think the experience can be ruined. Davidson's debut was very much a vampire novel although that word is never once used. There is an interpretation of that novel that doesn't include the famous blood suckers but I think it is pretty clear.

This new novel appears to be carrying forward a theme of classic horror movie tropes done with a literary and southern gothic feel.  The Boatman's Daughter is a tale of mid-south drug runners and witchcraft. If I was elevator pitching this to Hollywood I would say it is a cross between the Jeff Nichols movie Mud and Midsummer. That is just to explain the tone.

This novel is the story of Miranda whose father is a drug runner going up and down the rivers and channels of rural Arkansas by boat delivering drugs. When her father is killed Miranda has to grow up fast and take on his jobs. Most of the action takes place ten years on. Miranda has to deal with a rogue's gallery of redneck criminals, a gross preacher and supernatural forces centered around a coven housed at a place called Sabbath house.

The noir elements are underlined by the quickly drawn but dynamic characters who establish themselves quickly in the story. The prose uses beautiful flourish to give the setting a sweaty lived-in feeling, all these elements are needed to give Miranda's world depth. That is why the more outlandish horror moments work so well.

I enjoyed the Boatman's Daughter but it was not the lightning bolt to my system that In the Valley of the Sun was. That was a total and complete game-changer. This book establishes that we can look forward to a career full of these powerful novels of high-class horror and sign me up every time.
Posted by David Agranoff at 9:31 AM