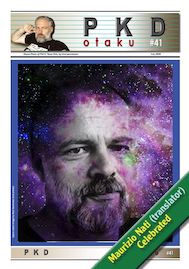 Get the new issue here!


One of the greatest things about doing a Philip K. Dick podcast is the insane amounts of information out there on Phil and his work. Thanks to Nick Buchanan and this e-zine we have 41 issues of nerd-out deep dive and I promise you each one is awesome and valuable.

This issue has a couple highlights but the cover feature is an article/ interview with PKD's longtime Italian translator Maurizo Nati. This was pieced together from interviews and letters with the translator. He worked as a translator not just for Phil but for other various novelists and his stories presented here give us some interesting depth. Nati seemed most proud of editing Sam Delany's Dhalgren a novel PKD famously hated. None the less I enjoyed this piece and gives insight into how readers in another country came to PKD.

There is also a short essay by Umberto Rossi and I found interesting the passage about copy-editing of China Mieville's novel The City and The City. Indeed that novel is a very PKD concept but the author's style could not be more different. The BBC TV show based on it was a Dick Like Suggestion on our podcast last year at some point.

Every page of the journal is interesting and next up is an interesting piece called a PKD pandemic journal which is just an essay looking at PKD's themes by decade and has a few excerpts from various letters. This zine compiles many old articles and next up is one from an unknown year by Marc Laidlow in the Science Fiction Book review about Clans of the Aplhane Moon I don't think every article needs to be recounted here but they are always worth checking out for the serious PKD nerd.

We at the Dickheads podcast have highlighted PKD's humor so I liked Nick Buchanan's article the Absurd Brillance of PKD. Thomas Disch's 1976 article is also a fun read.  There are a couple articles from the UK fanzine Speculation and those are fantastic. Richard Gordan Picking apart  Three Stigmata in a 1966 issue is a super great look at the novel and he argues that Dick is the American Ballard. Who can argue with that except to say he really is the American Brunner, which to me is no less of a compliment.

What is most neat about what Nick Buchanan does with Otaku is find things like letters from 1983 science Fiction magazines reacting to PKD's obits. In one case we see that Peter Nichols seems to be blowing off Phil's contributions and inaccurately giving the impression that he had a friendship with Phil. Most important to me as a PKD scholar in this issue is the two letters from  Ted White, one from 1976 and one from 1983 after Phil's death.

This details the history of White's brief but interesting involvement with two novels Dues Irae and We Can Build You.  His story is consistent 7 years apart when he argues that he help match-make Phil and Roger Zelazny.  As well as the debates over the ending of First in the Family/ We Can Build You. This was a novel that Ted White published as a serial with a different ending than the final published novel that Don Wollheim and Daw Books put out.

Otaku is for serious PKD nerds only, but damn this is another great issue for us. I enjoyed the Speculation articles and the Ted White letters were most interesting but as always I enjoyed the whole thing overall.

Posted by David Agranoff at 8:47 AM

Gee, how nice of you to give Nick all the credit for PKD Otaku #41. Shows indeed how closely you read it. He is ONLY responsible for the page design and layout. One of his skills is graphic design. The actual EDITOR, who you did NOT mention is Patrick Clark. He is responsible for starting it in 2002, and ever since. Once again a great job done.

Nick Buchanan is a talented visual artist, but the content of PKD Otaku is the work of Frank Bertrand.