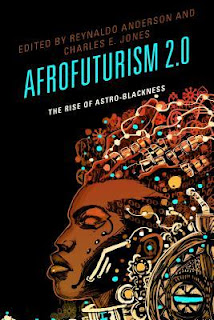 Extrapolation is an academic journal covering speculative fiction. It was established in 1959 by Thomas D. Clareson and is currently a labor of love by various academics including two friends of our podcast. D.Harlan Wilson is the review editor and this issue is edited by three-time Dickheads podcast guest Lisa Yaszek.  The theme of this issue is Afrofuturism. I was very excited to dig into this edition. I have seen articles from the journal from time to time but this is my first time reading an issue cover to cover.

The term first came into being like many subgenres it was coined in an essay Mark Dery wrote an essay 'Black to the Future' in 1993. It is not as though black or African Science Fiction didn't exist before this point but many even serious readers in the field were hard-pressed to go beyond the two first giants in the field Samuel Delany and Octivia Butler. There is one good reason those two authors stand out - they were incredible. The lack of other voices of color through most of the 20th century in Science Fiction has plenty of reasons and blame to be spread around.

Thanks to the works of academics like Lisa Yasak the Georgia Tech professor who co-edited this issue we have learned that the input of female Science Fiction authors in the early days of the genre was underreported. While that is super clear reading The Future is Female this journal has a very different point to make.

In an essay towards the end of the journal Doug Stark made the point "Science fiction has always had a realism problem. This is not difficult to identify—you might say it is in the name. Conspicuously lacking are the realities of racial difference which have often been and continue to be erased in science fiction writing. Since its beginnings."

Afrofuturism is a movement that has grown in amazing leaps and bounds since the term was coined but as far as I can tell the effort to study it is less about rediscovery like the study of feminist science fiction. One of the coolest aspects of this journal is it not only highlights the African and Latinx speculative fiction but express in art, music, and social media. Black Panther coming out of the MCU has made it mainstream and now people are looking for MORE.

Andre Brock writes about black twitter and social media and presents the idea that Black cyberculture is post present, in a sense that a serious Afrofuturism discussion is constantly evolving on the internet.  "Informational blackness is not  post-human, instead it is a speculative cyborg blackness mediated by digital."  I related to this because I have found the way communities operate online to be head spinning at times.

The next essay was very eye-opening to this very close-minded metal and hardcore dude who doesn't really listen to music I am not interested in. Taryne Jade Taylor wrote about Latinx futurism in hip-hop and honestly I had no idea that Cypress Hill had a song with Pitbull and Marc Anthony about decolonized counter-hegemonic Latinx futurism but that is why you read to learn. Hey, I learned about many cool songs that checked out.  They were not for me but I am glad to learn they are out there.

Lidia Kniaź in the next essay appears to trying to deal with the growing movement and how it has been expressed across media. It also deals with the debate that author Nedi Okorafor who I have reviewed several times here on the blog. It is important for her to not seperate herself from Africa, even in her Binto space opera trilogy the main character of the books wears the soil of her homeland on her face and in her hair. Okorafor has said “I am an Africanfuturist. BEFORE you start asking for or debating its meaning, please call me the name first”

Kniaź is very sympathetic to Okorafor who makes this point often as she can. "Okorafor’s
spelling of the term Africanfuturism as one word indicates the inseparability of those two notions. By creating a blend, the novelist seems to reinforce the link between Africa and speculative thought."

Just the idea that first contact is something that needs to be re-framed is something I was not prepared to consider. It is a very interesting notion that without really meaning to do this the collective Afrofuturism movement has so often done this is fascinating.

I have already quoted Doug Stark's essay about Sci-fi's problem with realism and I can say it had a real impact on me already. This quote was most important to me. "Sf’s representation issues do not merely reveal authorial biases and assumed readerships. They insidiously foreclose futurity for those who cannot find themselves in depictions of heterosexual, cis-gendered, able-bodied white men."

Since the death of Octavia Butler the movement lost one of its earliest and strongest voices. That said closing with Samuel Delany is as strong as it could get. From reading both their interviews and enjoying following Delany on Facebook it seems like Butler was more fond of the label. Delany starts his essay stating "Unless we set up our critical mirrors very carefully, arguably there is no such
thing as Afrofuturism."

Delany like many of his generation is very concerned with teaching the history of the genre and that is something we have in common. In this essay, he highlights the strengths and weaknesses of two classics with black characters by white authors in the field.  More than Human by Theodore Sturgeon and Tiger!, Tiger! AKA the Stars my Destination.

Overall this journal is an excellent piece of academic work highlighting the growth of this subgenre and the cross-media offshoots. The most important thing is I learned a lot that will be helpful for the podcast and more importantly my citizenship in the Science Fiction community. 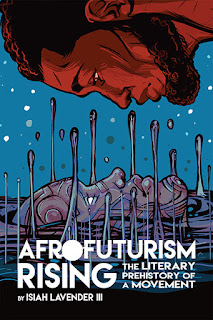 Posted by David Agranoff at 7:19 PM