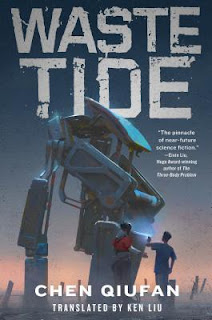 
Locus Award Nominee for Best First Novel (2020)
I have long been a fan of Chinese story-telling, it started with Kungfu movies as kids, I still have a shelf of Wuxia (kungfu high fantasy) movie DVDs.   I followed that passion to the hard to find translations of those classic novels. In research for my Wuxia Vampire novel Hunting the Moon Tribe I read the classics of Chinese fantasy like the bizarro collection Tales From a Chinese Studio and the Romance of the Three Kingdoms. So  more than most Sci-fi nerds I have been dying for these translations for a long time. I know many Science Fiction readers and critics have read The Three-Body Problem trilogy, which benefited from Barack Obama putting on a reading list.

I can't thank Ken Liu enough and hope that Waste Tide signals a fresh wave of Chinese Science Fiction translations. A few years back I read his first translation anthology Invisible Planets. That is an incredible book and a must-read for anyone who wants to get a flavor of science fiction coming from China. The book is kicked off by a totally bonkers story by Chen Quifan that was as much of a horror tale as it was cyberpunk.  Year of the Rat was the story of soldiers in a battle with genetically enhanced neo-rats. That was not the only story from the author in that collection but there was also a very PKD influenced neo-noir The Flower of Shazui that I talked about in the Dick Like suggestions on Dickheads at some point.

Chen Quifan was on my radar at this point so Waste Tide has been on my list for some time. There are plenty of reasons it should be on your radar too. Science Fiction is a bit of a universal language while some international writers like Stanislaw Lem have been regularly translated for decades the translations coming how of Asia have taken longer to surface.

Thanks to Kurodahan Press, a company formed by ex-pats living in Japan we have seen several Japanese translations including anthologies and novels.  Without the translations Ken Liu has brought us I am not sure in America we would ever be exposed to the fantastic fiction coming out of China. Waste Tide is a prime example of the importance of their work.

So to get focused on this novel. Chen Quifan clearly has a dark and rich imagination. This being my third story of his it is clear that the work is dripping with weird inventiveness. WT is science fiction reaching its greatest potential. Social-political message carefully woven into well thought out speculation that holds a mirror on the relationship between America and the country that produces the majority of the electronics it uses. This story not only benefits from a Chinese voice, but it depends on it.

Quifan has much to say in this novel about class divisions, environmentalism, corporate exploitation, technology addiction, and integration. I know it sounds like a lot of elements but the novel perfectly uses the setting and characters to explore multiple points of view.

Set on Silicon Isle a landmass that is partially artificial off the coast of China near Hong Kong. The majority of the isle is made up of discarded electronics and cyborg body parts that had become trendy with transhumanists. When we are first introduced to the district it is through the eyes of radical environmentalists trying to stop the shipment of electronic waste that has come across multiple oceans from New Jersey to this new hotbed recycling.
The reality on the ground is a giant waste dump that is inhabited by people called Waste People and the land is controlled by three constantly warring crime clans. We are also introduced to several native characters including gangsters but the most interesting character is not surprisingly is one of the Waste People. That is Mimi whose story becomes woven into the Mecha and transhumanist elements.
.
Much of the story is told through the point of view of an American corporate lackey Scott Brundle who is a veteran of several of these international operations with a company called TerraGreen. Their model for business is at the heart of the novel and Scott Brundle's conflict over his role in it is interesting.

"The pollution generated by the process far exceeded EPA standards"... "It wasn't worth it."

This appears to be inspired by the author's real-life experience of living near an electronics dumping ground.  I have seen some commentary that suspects the author is placing all the blame on capitalism and outside forces for the mess at Silicon Isle but that is not the case.

"TerraGreen would transfer waste and pollution overseas, to the vast lands of developing nations. TerraGreen recycling would help them construct industrial parks and production lines..."

Waste Tide is not unfairly depicting capitalism here and the local governments play a huge role. While it is easy for American readers and critics to question Chen Quifan, he has written a savage piece of speculative protest. At the same time, the novel is fun and action-filled.

This is a very politically sharp novel and it doesn't exactly paint the most pretty outcome for China's future as the main electronics manufacturing hub for the world. I found myself thinking this is a bold and daring story for an American Science Fiction author but it seems even bolder coming from a writer who lives in a country that controls information like China.

The best reason to read international science fiction is the different cultural perspectives. It is disappointing to look at reviews of this book that seem to want the same science fiction they are reading from western writers.  Chen Quifan clearly holds a mirror to China throughout. This moment however stood out to me.

“The offices in the skyscrapers were lit bright as day. The giant eye zoomed in and observed a hundred thousand faces staring at computer monitors through closed-circuit cameras; their tension, anxiety, anticipation, confusion, satisfaction, suspicion, jealousy, anger refreshed rapidly while their glasses reflected the data jumping across their screens. Their looks were empty but deep, without thought of the relationship between their lives and values, yearning for change but also afraid of it. They gazed at their screens the way they gazed at each other, and they hated their screens the way they hated each other. They all possessed the same bored, apathetic face.”

Once the cyberpunk and mecha elements kick in during the second half of the novel, the directly political elements could get lost. Thankfully this is not a problem. While I hesitate to talk about Mimi's arc explores transhuman issues and ideas. While early in the novel the props of discarded cyborg limbs are tactile how we exist as data becomes central to the themes.

“Welcome to Anarchy.Cloud. We provide information storage and remote computing services from low orbit server stations. Our operating entity belongs to no nation, political party, or corporation. As far as practicable, we endeavor to help you circumvent laws like the American PATRIOT Act and the supplements to the European Union’s Article 29 of the Data Protection Directive, which are designed to invade data privacy in the name of antiterrorism.”

"What are you?" She squeezed out the question that had been plaguing her all this time.
"A nuclear explosion that has been slowed down a million times; a by-product of billions of years of convergent evolution; your second personality and life insurance; the free will that emerges from quantum decoherence. I'm accidental; I'm inevitable."

Waste Tide is right up my alley in many ways. Is it perfect? No, but the faults are minor. To me the characters and setting are interesting enough to carry the book. The excellent cultural and political commentary are like icing on the cake. This is an important read for Science Fiction readers and academics. Its place in the cultural opening of Chinese Science Fiction is important but outside of that it is just perfect speculative fiction. I am willing to go 5/5 on stars and I don't take that lightly.

Posted by David Agranoff at 7:58 AM