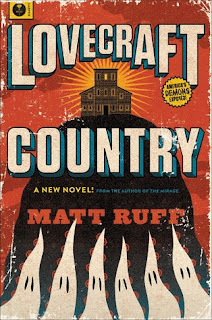 Lovecraft Country by Matt Ruff
Hardcover, 372 pages
Published February 16th 2016 by Harper
There is a very simple reason I choose to read this now. We are one month away from the premiere of the HBO series produced by Jordan Peele (Us) and Misha Green (Underground) starring Jonathon Majors fresh off impressive roles in The Last Black Man in San Francisco and Da 5 Bloods. I was excited to see the show but knew I wanted to experience the story as it was intended before I saw it on the screen. What I didn't understand until I started reading was that Ruff's vision was always intended for this format.

Lovecraft Country is more X-files than Lovecraft in tone, the chapters provide an episodic structure, and reading interviews with the author only confirmed what was obvious on the page. Ruff had replaced Mulder with a science fiction reading Atticus Black who traveled through the Jim Crow fifties researching the Safe Negro travel guide, a slightly fictionalized take on the Green Book which has since become famous because of the embarrassingly saccharine-sweet Oscar bait white savior movie The Green Book.

Ruff said that he thought of it and pitched as a TV first, but it is excellent researched and written and it stands alone as an important work of horror fiction. Through mythology and monster of the week stories it transplants the X-files into a more openly racist 50s thus provided an excellent backdrop for horror.

All the stories work on some level and as a whole, the book is powerful as a work of horror but also a statement on the timeless horror of racism and the power of the system in America that wields it. The stories do at times address various Lovecraftian mythos but the book is not beholden to Howard's beasties and one of the most powerful stories has nothing to do with the mythos.  Jekyll in Hyde Park might sound in the title like it would tackle the classic monster inside tale but in this story, the character Ruby wakes up white, and thus explores issues of race in important ways.

The opening story works like a pilot setting up the characters, setting and mythology but to me the best story was Hippolyta Disturbs the Universe - a cosmic horror story about Astronomy.  Overall as a book, it stands alone as an important piece of work, and I recommend you read now before you watch the show.

The majority of this review might have to deal with two elephants in the room. First is Matt Ruff being a white author. I personally think this should not be an issue, he did his research and nothing in this book appears to have prevented Black creators like Jordan Peele and Misha Green from doing the show. That said in recent weeks we have seen the first time YA author Alexandra Duncan pulled her own novel Ember Days from publication because it was about Gullah culture. The Gullah are African Americans who live in the Lowcountry region of South Carolina and Georgia. Duncan decided that she was not comfortable representing this very niche cultural minority as a white person in the same community.
Article about the Ember Days situation
Her statement on Twitter
I don't pretend to understand the ins and outs of Duncan's situation and the debate grew quite toxic afterward. I respect her decision, my personal feeling was that the novel deserved a chance to be published and judged before the debate raged.

Lovecraft Country is a novel about the black experience written by a white man and now it is being translated to the screen by Black filmmakers. It is messy in this greater debate. I think the work should be judged by the content, but also admit that as a white creator that getting diverse voices into publishing as been a struggle over the years. I can say as someone who is constantly submitting work, agents and publishers are asking and looking for diverse voices. Hopefully, things are changing.

That said I am reviewed Lovecraft Country purely on what I read on the page. A GREAT novel telling an important tale.

The second elephant in the room, this is the fun part. The publishing and the success of creative work whether film or book is timing. Lovecraft Country had some magical timing. Released on the same day was the incredible novella The Ballad of Black Tom by Victor Lavalle. When I saw magical I mean it is also a period horror story about Lovecraft and racism. The two authors both went to Cornell and studied under James Turner for Africana studies. It is cool to learn that the two authors loved each other's very different takes on the subject.

It is almost impossible to talk about one book without the other once you read both. I think the most important thing is that you should read both. They are very different, Lavalle is a New Yorker who used his novella to react to Lovecraft's most racist piece of fiction The Horror at Red Hook, which paints a very ugly picture of 1920s New York. By writing the novella from the point of view of a nameless black character offhandedly described in the Lovecraft story the story uses meta-fiction to address Lovecraft's most ugly stories.

Personally I find Ballad of Black Tom is more my jam, I find it a more stunning work of fiction as response and dialogue but it doesn't take away from the power of Lovecraft Country. They compliment each other so well. That brings me back to the debate over Alexandra Duncan's novel.  There is nothing wrong with Matt Ruff's novel commenting on race issues and Lovecraft, it is just important that we also have the African American voice in Victor Lavalle. Check the interview I linked below from the Barnes and Noble website.  The dialogue is so important. Both stories are horror as art, as activism. There is nothing better than that.
My 2017 review of The Ballad of Black Tom
Great interview with both authors on the Barnes and Noble website.
Posted by David Agranoff at 10:38 AM