Book Review: Night of the Mannequins by Stephen Graham Jones 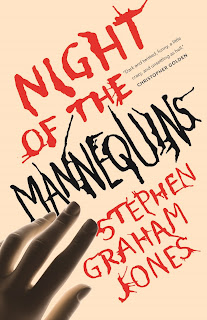 Night of the Mannequins by Stephen Graham Jones

Paperback, 136 pages
Published September 1st 2020 by Tor.com
Long time fan of Stephen Graham Jones and since my experience reading The Only Good Indian which I have not been shy of spoiling my best of the year list as my favorite novel of the year. I admit my experience of Night of the Mannequins was absolutely influenced by my interview with Stephen early this year on the podcast that shares the name with this blog.

Here is the thing I am going to state clearly and upfront. Stephen Graham Jones with the back to back of Mongrels and The Only Good Indian cemented himself as an author I will follow to anything he puts between a cover.  The strength of NOM comes in the playful, sarcastic tone. This short book is about teenage pranksters and in a sense, the story itself is a prank.  A violent prank by an author who is so good that he writes the most artistic of horror fiction while being one of those fans who hates slow-burn arthouse horror.

NOM is the tongue in cheek teen horror that comes very much from a singular voice. When I say the interview taught me about this book that is what I mean. Stephen told me in the interview that he hates slow-burn horror movies. He wants to get to the slasher and most violent stuff when he watches a horror movie. At the same time, he writes beautiful prose, understands his teenage characters, and in this short book subverts expectations.

The Only Good Indian was structured so each act had a different style of prose.  As gut-wrenching experience as it was I not alone in saying that the first act was the most entertaining style of the three. The characters leaped off the page and was smile-inducing in the subtle comic observations. Very Lansdale-like in the ability to use subtle moments to make you smile or feel uncomfortable.
At this point I want you to know that this novella has a Splatterpunk meets Lansdale and you should read it. STOP RIGHT here so you will not be spoiled and enjoy it.

OK SPOILERS. GO READ IT AND COME BACK. I MEAN IT.


“So Shanna got a new job at the movie theatre, we thought we’d play a fun prank on her, and now most of us are dead, and I’m really starting to feel kind of guilty about it all.”

So Stephen Graham Jones wrote a new novella and thought he’d play a fun prank on us, and now most of my expectations are dead and I’m starting to feel kind of jealous about it all.  Jealous of what he did as a writer. The set-up is there paying off the title. A group of rural teens who are super recognizable to this former small-town trouble maker.

The story is set up with a perfect misdirection, I didn’t even read the back cover so I was totally like clay that SGJ molded into thinking I was reading something else. Sawyer is a teenage trouble maker who unofficially leads this group of trouble makers. He is the one with all the bad ideas, that sound hilarious to the yet fully formed brain. When they find a beaten old Mannequin in the woods they start using it in prank after prank.

One of those pranks is on Shana by sneaking Manny into the theater she works at. Given the title and the set-up, I believed Swayer when he said he saw Manny come alive in the theater and escape. Of course, you think this is a novel about the start of the Mannequin apocalypse. Certainly, with a title like that.

The narrative and psychological magic trick in this novella is about the madness of teenage indifference cranked to 11 like a spinal tap volume knob. Stephen Graham Jones always makes everything 'one' louder no matter if it is the humor, horror, or scathing insights. The violence and creeping horror is enough for a book twice the length but the pages drip with all the ingredients of SGJ special sauce.

Sawyer is the monster, while he projects on Manny it is to do violence and justify it with a story that makes him a hero. He must act before Manny. It is a stupid plan, but Sawyer is the guy who always has bad ideas. There are only green lights in his mind.

“Sometimes you just know what you're doing is the only thing to be doing. That the world is conspiring all around you to make it happen, like, not just giving you permission, but herding you the direction you need to go, giving you secret nods and obvious hand signals, and getting everything out of the way so you have the clearest path possible.”

Night of the Mannequins is one of those books that just feels like silly fun as the pages zoom past but it is one you’ll think about long after it is done. Bravo again Stephen Graham Jones.

Posted by David Agranoff at 9:53 AM