Hey I’m not sure anyone cares but since moving we are now super close to movie madness…Which happens to be one of the best video stores I’ve ever seen. Also an old friend of mine who will simply be known as Bru-dawg lives here. Bru-Dawg is a movie collector who loves bad action movies, horror, gore and Italian horror,western and action movies. So basically I’m in movie geek heaven.

I thought some of the folks reading my blog might enjoy some picks and mini-reviews of movies I’m watching. I’m on a Hong Kong kick right now but I’ll be doing some euro horror and a classic TV movie horror flicks soon.

Golden Swallow: In 1967 Chang Pei Pei who played Jade Fox in Crouching Tiger, Hidden Dragon was the star of this Martial arts classic. A sequel to the amazing King Hu film Come drink with Me. It’s directed by Chang Cheh who made about a thousand kungfu movie classics like Five Element Ninjas, Five Deadly Venoms and One Armed Swordsman.

Like most Chang Cheh films this movie is blood bath with corpses piling up to Kill Bill or commando films. Great movie, in fact crucial.

The Hidden Blade: One of the best films of the last few years was a Japanese Romantic drama called Twilight Samurai. Tear-jerker in everyway when I heard that it was second in a trilogy I searched for the first(still haven’t found it) and didn’t find the third until last Saturday.

Hidden blade is not quite as amazing as TS but it is a great samurai film. A slow and quiet film about honor, true love and friendship. Must see.

We’re Going to Eat You: The second film by Tusi Hark the amazing director by the once upon a time in china films, Time and Tide and uh..er Double Team. This is a demented Kungfu cannibal comedy. You read that right. It drags a bit at times, but the fights are good, the gore intense and the laughs are there.

This movie is only for diehard Hong Kong or Gore fans

Eastern Condors: Bru-dawg and I had a Hong Kong double feature on Sunday watching We’re Going to Eat You and this Sammo Hung classic dirty dozen rip-off. This movie has cameo’s by Cory Yuen and Yuen Woo Ping but the star is the over the top fight scenes. Brutal, brutal fights and perhaps my favorite stabbing in a movie ever.

The last fight scene has about five rewind worthy cringe inducing kungfu moves. The villain is this amazing general played by the dude who went on to play the landlady’s husband in Kungfu Hustle.
Posted by David Agranoff at 1:01 PM No comments:

My story in the new flurb

One of my favorite cyberpunk, bizarro Science fiction authors does a webzin called Flurb. I'm super proud to say my story A Fifth Noble Truth is in the new issue.

Labels: My books and career

To your left Jet, Jackie and Woo-Ping

The Kungfu movie stars have aligned just right for the first time Jet Li and Jackie Chan are working together on a film. At first I was skeptical about the project that despite being filmed in china was going to be written and director by Americans and in English language. The writer is talented having written John Fusco (Young Guns -which is not great movie but could have been worse) and Directed by Rob Minkoff who directed the Lion King and Stuart Little. Say what you will about those kid movies they were well made kids movies. Most important is Yuen Woo-Ping directing the action.

He should have just directed the movie, the man has made some brilliant films as a director – two of my favorites being Iron Monkey and Tai-Chi Master.

Woo-Ping and Jet Li working together always has fantastic results, Fist of Legend was some of the best onscreen fights ever(by anybody), Tai-Chi master over the top like no other Kungfu Comedy and recent fights in Unleashed and Fearless are some of the best in Li’s career. Jackie Chan and Jet fighting on screen should be interesting although I have to admit that It pales to onscreen matches between Jet Li and Donnie Yen(Hero and Once Upon a Time in China II)

The film is called Forbidden Kingdom and has an American kid falling through some kind ring/closet type thing into the story of the Monkey King(AKA 15th century Chinese classic novel Journey to the west). This story is one of the most important mythologies in Chinese literature and pop culture there just is no Western equivalent. Part Lord of the rings, part Mark Twain the Monkey King is more than just a classic to the Chinese.

As the owner of over Twenty Jet Li DVDs I am a devoted fan to his work more so than any other actor working in the world. I’m not the biggest Jackie Chan fan but I am excited about this project even a little more than I am for Indiana Jones and the Kingdom of the Crystal Skull.

Not that anyone cares but I paid homage to the Monkey King tale in my first novel Hunting the Moon Tribe. The story of the Monkey King is so important to Chinese mythology I just didn’t think I could avoid it. It’s that important. Films have been done based this book (several hundred years old) mostly notably when Stephen Chow of Kung Fu Hustle fame starred in a 1994 production titled Chinese odyssey which had several sequels.

Let’s hope they get it right.
Posted by David Agranoff at 3:56 PM 1 comment:

For off the hook Sci-Fi the Doctor is in! 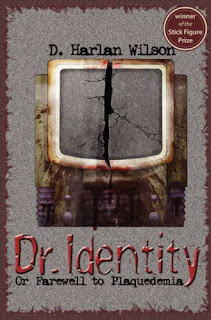 D.Harlan Wilson like many authors has a lot to say about his job. As a college professor teaching students about literature we get a pretty wide glimpse into the man’s thinking by cracking open this book. From the promotional material and the various blurbs (some are hilarious fictional ones) on the cover you can see that most people reading this book have every different takes on the material from each other.

What is Dr. Identity. Bizarro? Science Fiction? Humor? Future-Noir? Speculative? Satire? Social Commentary? Dystopian? Cartoonish? Pulp? Surrealist? The short answer is yes! All of the above and then some words I can’t think of. Not to slight all the other fantastic Bizarro books that have sprung out of the growing movement I would have to declare this one perhaps the most brilliant one I’ve read yet. Is it the best or my favorite? I’m not sure, but I have to say Science Fiction fans have not had a laugh riot like this on their hands since Douglas Adams got bored with his own books.

The novel is about a professor (Dr.Blah Blah Blah) in a quite absurdist future that has to go on the run after his substitute doppelganger decided to slaughter his class. On the run in Bliptown where time doesn’t always move forward or you must shop in stores where bug eyed monsters attack you for not buying fast enough provides a hilarious and inventive back drop.
The level of creativity and invention that appears on every single page is what makes Dr. Identity a must read. D.Harlan Wilson is real talent that has me imaging Phillip K Dick writing for the Monty Python. Fans of Rudy Rucker’s funny and bizarre science fiction will also find Wilson’s work a good fit on the same shelf.
Posted by David Agranoff at 3:36 PM No comments: