The pilot novella of The Fallen Guardian's Mandate will be published on the Freezine of Fantasy and Science Fiction starting Jan 4th 2010. It will be published a Chapter a day Monday-Thursday through this whole month. On Friday the freezine will publish unrelated stories by Johnny Strike and my very close friend from San Diego Paul Stuart. After this month I'll return to adventures of Xu(pronounced Shee-You) on the freezine from time to time to continue the story. I have even talked a few writer friends about them writing stories in the Moon Tribe-Verse.

So what is the story behind the novella?

This year my first novel Hunting the Moon Tribe will be published by Afterbirth books. For me this is a long journey. The idea for this novel came to me in 1994. It’s changed many times over the years. In the beginning I was inspired to write a classic traditional vampire novel, complete with an epic battle in Transylvania at the end.

The structure of the story never changed much, but in 1999 it occurred to me that I had not seen a really effective blending on my two favorite genres. The martial arts fantasy (Wuxia Pan) and horror. I have since then discovered many great examples of this kind of crossover but I still feel I had something original to give with this story.

This was perfect crossover for me. Growing up in Indiana every Friday night was Sammy Terry (look him up on you tube!). Our local horror showed more Hammer vampire movies than are in print on DVD now. After Sammy Terry channel four had Black Belt Theater which showed amazing Shaw Brothers classics like Spearman of Death,Executioners of Shoalin, Chinese Super Ninjas and the Five Deadly Venoms.

In 2002 I finished the first draft of a screenplay of Hunting the Moon Tribe. I had this idea that in the wake of Crouching Tiger’s amazing success that Hollywood was looking for a script with an all Chinese cast and a special effects budget through the roof. The first draft of the script actually placed as a finalist in a screenwriting competition co-sponsored by miramax’s action arm Dimension.

The script had a lot of problems, shit it was my first time trying. I studied screenwriting for a year intensely. Devoting most of my free time to reading classic scripts and books on the subject. The second draft of the script then placed as a finalist in the Nicholl Fellowship. This contest is a non-professional contest put on by the Oscars.

For almost a year I was sending the script out to various production companies who were actually contacting me. Basically everyone said the same thing, Great script, but all Chinese cast. You should shop this in Hong Kong. Sure I'll just do that. Ugh.

I got burned out on screenply and decided to write my first novel. I had intended to write something else when my friend and brilliant novelist Cody Goodfellow suggested that I write Moon Tribe first. His reasoning was simple, writing the first one is the hardest, in a sense I had already done three drafts. I knew this story inside out.

Once it became a novel an intensely deep and textured back story formed in my head. Thanks to Shaun and the Freezine this story will be a serialized prequel to Hunting the Moon Tribe Called “The Fallen Guardian’s Mandate.” Moon Tribe costs money to buy and this one will be free. I am not telling you a big secret that I hoping you’ll get hooked on the free one and go on to buy the book.

The first couple chapters of FGM will be posted before the book is released and if we time it right it will unfold in a cool way with the book. If you were to read Moon Tribe before certain chapters of FGM it could “spoil” a few parts. No matter when you start it should work, I am just promising people who follow the blog and book as they will be released will get the best experience.

I thought this was a really cool way to tie Moon Tribe to the Wuxia Pan novels like Book and the Sword, Sword Stained with Royal Blood and others that inspired it. Those novels were published as serials in Hong Kong newspapers. With four novels (written) under my belt I decided to work on this one from time to time. I hope you like it and will keep up with it.

Moon Tribe takes place in modern times but FGM does not. The prequel takes place in china in the year 1643. If you know anything about Chinese history you’ll know this is a really important time in their history. The Ming dynasty was dying on it’s feet. I would rather not discuss the plot like you would on the back of the novel (hell it may change). Lets just say it will have swordsmen and women, ghosts, monsters, demons, angels and more political intrigue than you can shake a stick at.

So without further a do… go check out the Freezine...
Posted by David Agranoff at 10:28 PM 2 comments:

Labels: My books and career 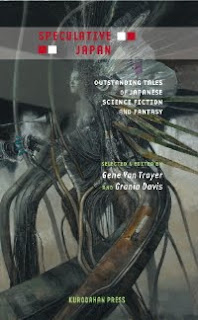 This review is long overdue, but I got hung up on writing project. SJ is everything I wanted when I first read about the book online. Most of what I know about Japanese fiction comes from years of watching Japanese films. I also have a bit of experience with some of the really strange punk rock they have produced. I had imagined that Japan would produce very interesting Science Fiction. This book might have been more appropriately titled “Classic Speculative Japan,” as most come from the 60's and 70's.

That is fine since most of the stories are truly fantastic and not really dated at all. Perhaps the best thing about this book is the amount of pages and time the editors and publisher took to enlighten the reading to the history of not only the authors and translators but also the genre in Japan itself. I enjoyed reading about Canadian Science Fiction author Judith Merril and her struggle to bring attention to Japanese Science Fiction in our part of the world.

One thing I noticed, many of the genre authors were translators themselves, bring the works of Asimov, Clarke, Phillip K Dick and Larry Niven into their native Japanese. Thankfully you don't end up with Japanese rip-offs of those western authors. Japan's science fiction of that era is of course very influenced by being the world's only atomic victims and the general events of World War II.

That being said the first horrific story in the collection “The Savage Mouth by Komatsu Sakyo” was everything I expected in Bizarro Japanese Science Fiction. The second story “A Time for Revolution” was also a strange post-Apocalypse tale. Some of the other stand-out tales for me in this book are “The Legend of the Paperstarship” by Yano Tetsu which read like a folk tale. My second favorite entry “Reiko's Universe Box” by Kaijo Shiniji feels like a Twilight Zone episode. The diversity of the collection is strong, the ideas contains make for a very original collection of Science Fiction.

A second book in the series is already published and you can bet it is already on my list. This is the second book I have read by Kurodahan Press. They are committed to bringing Japanese cult and genre fiction in print in English they are doing an awesome job. As a press they deserve support because not only are they putting out great books but their mission is important. I excited by the stories in this book but also that I have a greater knowledge of Japanese Genre fiction's important history
Posted by David Agranoff at 10:06 AM No comments: