Every second of this song makes me want to go crazy, the music, the lyrics, the speed, every thing. I can’t point to a moment. They first time I saw Earth Crisis after years of being broke up in Seattle they opened with this song. I thought I was going to go crazy but by the end of the song I was covered in blood, sweat and felt like I was going to have a heart attack. I was so happy to be alive and be me.

One of my favorite songs of all time, this song is nuts. You got to forgive the recording Abnegation never had money or got a good recording. The snare has a crazy snap, but this song has amazing energy. If you watch the video of three songs from 1996 Cleveland fest you can see the amazing energy they had live. At 1:02 seconds the song breaks down into a killer mosh. I can’t even tell you how crazy I went singing along in the pit to this song.

Ironically another feminist mosh anthem. I believe this song is about the cycle of domestic violence. Chicago’s Race Traitor. Andy (Fallout Boy) Hurley kills it on this song. This song brings the Mosh in 11 seconds in with a killer breakdown. But this song has three levels of mosh. :35 seconds in we get an even heavier mosh part. After the speed picks up to explode with the emotions of the lyrics “How could you fuckin touch him!” and breaks it down one last time. In a 1:40 seconds RT produced an epic of mosh brutality.

I could only find a live version to share, I saw them the night before this show at the Che and you can bet I was wind willing and going crazy at 1:07 into this song. Undying has tons of amazing mosh parts, Jimmi is a Vegan mosh master. The chorus of this song is a genius mosh that is played at to slightly different speeds and fits in the song so amazingly. Love it.

Might be my favorite record of the 90’s. Brought death metal into vegan hardcore, and the lyric “Tormented by the legions of evil and their infernal hatred of life” makes me feel better every time I hear it on a bad day.
Posted by David Agranoff at 10:14 AM No comments:

This my second Greg F. Gifune novel, the first Children of Chaos I reviewed in April 2010, I got Dominion based entirely on the strength of that novel. It was knock-out of a book. I knew I wanted to read more Gifune, and this was important to my enjoyment of the novel. I went in blind, I didn't even read the back description on the cover. After the prologue which was intense, brutal and ugly I wasn't sure I could read a whole book like that.

Thankfully, that was just a much needed introduction as extreme as Ed Lee but important to the story. If you trust my opinion or my reviews just stop right here and read both Children of Chaos and Dominion. I think I liked the subject of COC a little bit more but Dominion was very tightly constructed and I enjoyed reading this novel.

OK, I am going to try to do this first part without spoilers but like I said you'll have a better time going into this book blind. Dominion is the tale of Daniel Cicero, A Boston Radio ad salesman who loses his wife in a tragic accident. She is killed crossing a highway, and the novel handles the grief in heart breaking and realistic way. After months of grief Daniel begins to wonder, what was she doing there? The only logical explanation is a late night meeting at the motel across the street from the mall where she was parked after hours. That is when the phone calls start a mysterious man calls insisting that his wife is alive.

Dominion is a great mystery, and has plenty of surprises and misdirection. Gifune is a talented Horror writer who is well known and respected in the horror underground and deserves to be breaking into the Mainstream.

Ok now for the spoilers review....


My only problem with Dominion came in it's final act. I think Gifune had done a wonderful job setting up the mystery and suggesting through out the story that supernatural explanation, or one based in Quantum physics was needed to explain the events. When it is revealed that his best friend had stolen and used his wife's identity I thought it was an excellent twist and made me feel effectively tricked. I was impressed because I thought the supernatural story thing was nothing more than misdirection. When the supernatural story line is re-introduced I felt like the end of a Friday the 13th movie when Jason got up one to many times. That said I really enjoyed the book, and will continue to work my way through his books.
Posted by David Agranoff at 5:08 PM No comments: 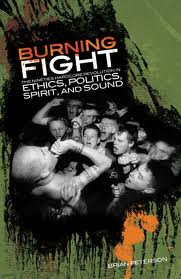 
Punk and Hardcore music is impossible to explain to someone who has never been apart of it. I thought about it a couple years ago when I saw a Vegan straight edge band from Southern California playing in Portland. I had friends around me that grew up in California, New York, Oregon and Indiana counting myself. We all grew up in different states but we all got into this loud music with similar ethics.

Hardcore to the outsider is loud aggressive music that sounds like screaming. During the 90’s hardcore peaked with a vital age. Peterson has taken on the nearly impossible task on documenting 90’s hardcore music scene. This is harder to do than a music scene that is all over TV and covered in mainstream magazines.

Hardcore is small, personal and often regional. The fans and bands are interchangeable, the fans make the records, put out the zines and perform in their own bands. To say this is an important book is a massive understatement.

Broken in four chapters that address the major issues addressed by the bands in lyrics like Straight edge, Animal rights and Spirituality. Next Peterson interviewed many of the major hardcore bands of the 90’s. Highlights include several interviews with Rob Fish and his bands, Earth Crisis, Downcast, Trial and Vegan Reich. Several of the interviews like Undertow and threadbare highlight how local hardcore is.

I have little nitpicks why interview Texas is the reason (not hardcore) and Cave-in (Ok, they were good but what impact), while amazing bands like Day of Suffering, morning Again, Birthright and Undying didn’t get entire chapters devoted to them.

I first got into hardcore music and straight edge in 1989, I was the only kid in my town who was straight edge and there were less than a dozen who were fans of or ever heard of New York Hardcore bands like Agnostic Front and sick of it all. When I got involved hardcore was different.

We didn’t have an internet DJ Rose of Path of Resistance always said we were like Gypsy tribes. In the 90’s hardcore exploded and it did so in many ways. It is hardcore to think back to a scene that existed where no one had ever heard the song Firestorm or Shelter was some weird new band by Ray of Today.

Burning Fight might also serve as tool for us weird hardcore kids to explain to friends and family what we gave up our lives for in the 90’s. Why did we drive all over the country for shows, why we did bands, why we got into all these radical new ideas. This book only Sctraches the surface. You had to be there but you know this as close as you are going to get.
Posted by David Agranoff at 8:58 AM No comments: 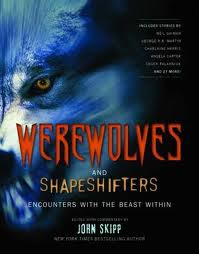 This is a must read for fans of horror fiction. John Skipp has done here something that editors always try to do when they do a theme anthology. If this is not the ultimate collection of shapeshifter stories I want to pointed to one that is better.


Featuring classics from as far back as Hp Lovecraft’s Shadow over innsmouth to 80’s classics by David Schow and George RR Martin. The collection goes from strength to strength with original stories from some of my favorites Cody Goodfellow and Jeremy Robert Johnson.

The biggest surprise for me was an amazing short story by YA author Tessa Gratton. “The Cold that Flays the Skin,” this is emotional wrecking ball of a short story that is effective in a very short word count. Cody Goodfellow’s bizarro post werewolf takeover vision of San Diego is both funny and twisted. Jeremy Robert Johnson’s tale is of life changing parasite, a running theme in the life of this author and a strong edition in the comeback of this hibernating dark bizarro author.

For me the highlights were gonzo 80’s blood drenched novellas by splatterpunk legend David Schow and George RR Martin’s classic Novella “The Skin Trade.” I read both a long ago but I am realizing now I was too young and not cultured enough to get every level these tales were operating on.

Martin’s Skin Trade is excellent modern noir tale with a detective, haunted houses, werewolf cults and it’s all blood soaked as 80’s horror tended to be at the time. Skipp calls it the centerpiece of the collection and yes it is a must read classic.

I really want to hand it to Black Dog for working with Skipp on these books, they are not just another anthology. These are important documents of horror that track the evolution of the genre as well as highlight the bold new work coming out of the genre. Big thumbs up, get this book on your shelf.
Posted by David Agranoff at 8:47 AM No comments:

Famous Monsters of Filmland is the longest running source of geek news out there. Decades before Fangoria and now Famous monsters has a review of my novel...

"This is a comedic zombie tale that really works." and "The main characters were very well thought out and three dimensional, the story contained enough violence and gore to satisfy the gore hounds with enough comedic relief to balance it all out. You wouldn’t think comedy would work in a zombie novel but David pulls it off fabulously."

You can read the whole review on the Famous monsters website click on books...
Posted by David Agranoff at 8:31 AM No comments: