Hey I put up a blog called Forged in the flames, which is designed to support my efforts to write an Earth Crisis biography. So That is where you should go if you want to keep following Earth Crisis news. I might do updates on the book here but Earth Crisis news will be there.

Posted by David Agranoff at 8:22 AM No comments: 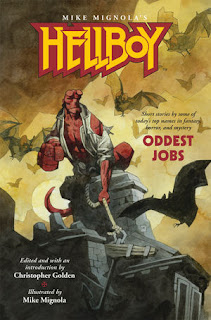 I admit I am a late comer to the Hellboy phenomenon. I discovered him when I heard The G. Del Toro was making a Hellboy film. I went to the library and picked a few graphic novels and yeah I saw right away why this amazing filmaker wanted to do a Hellboy film.

If you only know Hellboy from the movies you are missing on some fine comic literature. That is not the only way to read Hellboy. A while back I read a greta Hellboy novel by the fantastic British horror writer Tim Lebbon. He followed in the footsteps of long time horror and tie-in author Christopher Golden who had written several Hellboy mini-series and novels.

Golden's coolest gift to Hellboy fans however has come from his editing of the Odd Jobs series which now in three volumes has featured Hellboy short stories from some of the most noted Horror, Fantasy and Sci-Fi writers working today. In book three Oddest jobs timed to be released with the second Hellboy film Golden has again assembled some heavy hitting writers.

I had originally picked up the book because it had the first collaboration between Splatterpunk Legend John Skipp and one of my favorite underground writers Cody Goodfellow. After picking it up I discovered tales by several of my favorite writers.

The Skipp and Goodfellow tale was short and effective tale about environmental activists trying to raise an avenging monster. Those two have sharp eyes for subtle political message – here is hoping they will get to do a Hellboy novel!

The highlights of the book for me included Stories by Joe R. Lansdale, Gary Braunbeck and China Mieville. China's story was a short funny piece about the effect of literature on the big red guy. Braunbebk brought Hellboy to the fictional Ohio town where many of his stories take place, neat surprise like Stephen King writing an X-files episode about Castle Rock.

The best story in the collection for me was the novella by Joe R. Lansdale. While casual fans know him as the man who wrote Bubba-ho-tep, he is much more. An extremely talented east Texan word-smith who writes demented and hilarious prose. I would LOVE a Lansdale Hellboy novel. He better than anyone in the book captured Hellboy's voice in first person and the story itself both vintage HB but also original concept.

Yeah Hellboy fans should check this book out.
Posted by David Agranoff at 9:41 PM No comments: