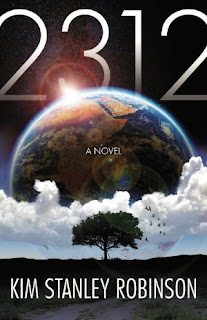 There are novels that are great entertainment and some novels that are achievements, 2312 is a fine example of Science Fiction literature that is so well written and and composed it transcends the genre ghetto. Since KSR has decades of genre publishing experience it will be marketed as a genre novel. If it was the work of a first time author (think Mary Doria Russell's The Sparrow or David Mitchell's Cloud Atlas) it would have been promoted as straight literature. The novel functions on multiple levels, in many ways it is a history of a possible future, a road trip novel but at it's core it is a love story between a person born and raised on Mercury with a person who grew up in the shadow of Saturn.

Set three hundred years in our future humanity has survived some less than pleasant centuries in part by expanding out in the our neighborhood in space. The novel opens in Terminator city a colony on Mercury. As you can imagine the bright side is too hot and and the dark side is too cold. In order to find the goldie locks spot the city of Terminator stays just beyond the horizon by moving on 42 tracks across the planet at 5 KPH. Sure it is a gee-whiz idea but KSR writes about these wonders like a painter with a skill for landscapes.

The landscapes are a strength of this novel but don't think for one minute he has fallen into the sci-fi disease of ignoring the characters for the gee-whiz stuff. At it's heart 2312 is a love story. Spacers in the future don't think about gender in the narrow terms we do. The main characters are Swan who mostly identifies as female and Wahram who identifies as male. KRS however breaks down these gender steroetypes in a couple hundred pages and the reader like the future society pays little attention to he/ she stuff and focuses on the persons and their amazing story.

The Maguffin of the story is the death of an aunt named Alex who leaves Swan instructions to carry on her work designing and terra-forming habitats around the solar system. The mystery comes when someone or something seems intent on destroying their work. The city on Mercury is attacked and almost destroyed. As Wahram and Swan investigate with the help of a 24th century inspector from Titan they begin to believe the suspect is not human at all.

Along the way they spend time on Venus, the moons of Jupiter, surf the magnetic waves of the Saturn rings and of course spend time on the ecologically crushed home world of humans.

Married to a scientist Robinson blends science and narrative about as good as anyone maybe even better than Arthur C.Clarke. He writes beautiful prose and never dumbs it down, some of it will likely go over your head but usually I could figure it out in time.

Being a left coast liberal and radical thinker Robinson explores the nature of capitalism, hierarchy and environmentalism. While he may not get the attention from the crusty punks the way Ursala Leguin and Octavia Butler have gotten recently this is a subtly subversive speculative novel.

I loved it. I think you should check it out.

This is a book that you will find yourself returning to. Why? To think about its ideas and to re experience its story. This is what science-fiction can be - an effective mirror of humanity that seeks to comment on current trends. Kim Stanley Robinson's history of the future does that. Now if only his history of the future were already our past.