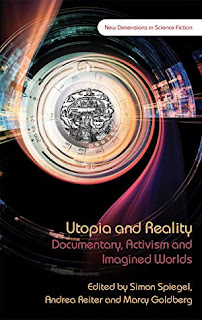 Published by University of Wales Press

I admit if I had not misunderstood what this book was about, I probably would not have read it, but this thoughtful well-researched anthology about Utopian films was very good. Happy mistake as it were. What I thought I was reading was a look at the history of Utopian novels and stories throughout history. I expected tons of essays about Utopian novels from Thomas Moore in the 16th century with Utopia to Leguin and Kim Stanley Robinson whose Ministry for the Future I was reading at the same time as this book.

The history of Utopian novels gets a great treatment in the book’s introduction, it laid out enough novels and books that I was making a list and added a dozen to my want to read shelf on Good reads. So I can’t complain at all as that was what I was initially looking for. I admit I was hoping for a whole book on the subject. Despite that but I am happy with what I got. This is a look at how Utopian visions have found an accidentally updated and modern home more in film and more specifically documentary film in recent history.

The editors did an amazing job finding or cultivating articles that highlighted examples both positive and negative. By positive I am thinking about the films about small-town environmental activism and negative being the viral internet videos that envisioned a Muslim Caliphate. I mean Utopias are somewhat in the eye of the beholder. The caliphate envisioned certainly seemed positive but at that point, it is hard to ignore the videos released with them that included violence and beheadings.

Once the actual articles start there is a variety of topics, all are interesting but like any fictional anthology, there are some that interested me more than others. Co-editor Simon Spiegel’s article On Isis videos “The Utopia of the Caliphate: Reading ISIS Propaganda 85 Videos as Utopian Texts” was in my wheelhouse because it related to an article I am writing and a novel I have been outlining.

I also very much enjoyed Reality and Utopia: A Conversation with Lyman Tower Sargent which in a sense extended the feeling of the introduction.  The various essays that rose above and became highlights for me included Trans-utopia: Documenting Real and Imagined Cities by Daniel Schwartz, Klearjos Eduardo Papanicolaou, Alfredo Brillembourg and Hubert Klumpner and Documentary Dreams of Activism and the Arab Spring by Jane M. Gaine

The second of those was probably my favorite that gave details on the Arab Spring which I didn’t realize until that moment I didn’t know much about.  That got down into details about the hero of the uprising who I didn’t know worked at google.

Practicing Hope: Ecofeminism, Documentary and Community Engagement by Chelsea Wessels and Living and Dying with Water: Indigenous Histories and Critical Bioregionalism in The Pearl Button Matthew Holtmeier both were great examples of showcasing films that highlighted on the ground activism, but in a sense every page of this book did.

Look I don’t have as much to say as this book is not my wheelhouse, but I thought it was a helpful read and I felt more educated in the end. The eco-feminism essay reminded me of activists from my life and overall it introduced me to some interesting people and stories I didn’t know. I do know this finding these Utopia narratives in documentary films is something I will be putting more energy into. OK book, mission accomplished.

Posted by David Agranoff at 7:05 AM