Book Review: The Ministry for the Future by Kim Stanley Robinson 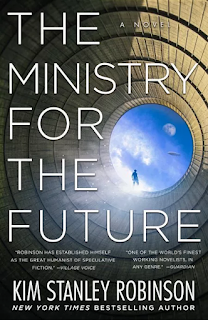 The Ministry for the Future by Kim Stanley Robinson

Sometimes when an author or musician puts out a piece of work it feels like something they have been building to over the years. I am not saying anything that has not been clear for some time. For more than a decade, Kim Stanley Robinson has been using Science Fiction to sound the alarm about global climate change most notably with his Science in the Capital Trilogy (collected as Green Earth) and New York 2140. That said even his generation starship novel Aurora touched on the subject as well by highlighting the importance of our relationship as a species to the earth.

Ministry for The Future feels like an exclamation point on these novels, a final say if you will. KSR has implied as much during interviews promoting this book.  To accomplish this final statement KSR uses a tactic I have spoken often about in the last year. The anti-novel structure first appeared in genre fiction in the 1969 Hugo award-winning novel Stand on Zanzibar by John Brunner, that novel was influenced by  USA Trilogy by John Dos Passos. KSR has also mentioned John Dos Passos in interviews but I think it stands to reason that Brunner’s ground-breaking ecological Sci-fi novel was also an influence on Ministry.

Ministry for the future shares a structure with those novels in the sense that the closest thing to main characters come and go. Through the narrative, the character moments are broken up with first-hand accounts, and poetic chapters directly speak to the reader. Some of these chapters include dark horrors such as the Indian Heat-waves that kill 20 million people and some vignettes like the chapter written in the first person from the point of view of a photon.

Some chapters are character-driven enough that we feel really connected to Mary Murphy who is the political figure at a new international committee set up to protect the rights of the animals and people of the future.  That is the heart of the idea, shouldn’t the people who have to live in the world we leave behind have a say?  The character moments are important and give depth to the story. Mary eventually comes to an understanding with the eco-radicals in the form of a relationship with Frank a member of the group Children of Kali who kidnaps her and wants her to do more.  He was radicalized by surviving the heatwave in India, his influence on her leads her to form a black ops wing of the Ministry lead by a fellow India survivor Badim.

These are good characters that have powerful moments peppered through the novel, but the reality is this anti-novel is less interested in them than expressing the message.  I know KSR says the characters are the most important element to him, but in this novel, the positive manifesto of a climate solution is possible to dominate the pages. No matter what he says the message is clearly driving this bus with characters several seats back. Goofy analogy but overstated to make a point.

The book is filled with moments that in isolation could be considered mission statement moments, the first came only twenty-fives pages in.  When KSR quotes his thesis advisor Frederic Jameson* “Easier to imagine the end of the world than capitalism: the old saying had grown teeth and was taking on literal, vicious accuracy.”

The most horrific moments of this novel, maybe of KSR’s entire career come in the early chapters when we follow characters desperate to survive the apocalyptic heatwave in India. This is that violence of climate inaction and capitalism mass murdering in a way that speculative fiction has a unique ability to highlight. It is easy to kick the can of action down the road if we don’t think about the actual suffering we are causing.  In chapter 51 Robinson points to an entire decade where the planet deals with this kind of climate suffering.

“The Thirties were the zombie years. Civilization had been killed but it kept walking the Earth, staggering toward some fate even worse than death.

Everyone felt it. The culture of the time was rife with fear and anger, denial and guilt, shame and regret, repression and the return of the repressed. They went through the motions, always in a state of suspended dread…”

It is not that far-fetched and ten years out we better start thinking about it now. Already Europe has dealt with various heatwaves, and here in America, we seesaw between extreme heat and cold depending on the season. The zombie years are coming and novels like this that paint a vivid picture are important of making sure we meet this moment.

“…the heatwave was said to have killed twenty million. As many people, in other words as soldiers who died in World War One, a death toll which had taken four years of intensely purposeful killing; and the heatwave had taken only two weeks. It somewhat resembled the Spanish Flu of 1918 0r 1920, they said; but not. Not a pathogen, not genocide, not a war; simply human inaction, killing the most vulnerable.”

The Indian heatwave chapters are dark and impactful but those moments of horror are not KSR’s strength.  So potential readers should not fear that they will be living in sorrow through these pages. This novel is content with introducing these ideas early and trusting you to remember that feeling while it focuses on solutions.

Perhaps the biggest weakness of this book is KSR’s reluctance to address the real-life anger that the Indian heatwave would naturally cause. We saw this last year the level of anger and violence that the video of the George Floyd murder inspired. Militant eco-radicals and the black ops wing of the Ministry are not ignored, but the author’s uncomfortableness with political violence was enough for him to sideline those elements.

In his interview with Ezra Klein KSR admitted to being uncomfortable with those elements and unsure if he didn’t fumble those moments. Ultimately the novel is still effective but Klein was more forgiving about this than I am on this point. The anger and fear will be a part of this future and the one and only problem I have with the novel is it is unrealistic to avoid this. It is not that it is not ignored, in this future air travel is extinct after drones attacked planes.

This is a minor problem overall when you consider that for more than 500 pages Ministry For The Future offers more than warnings. Plenty of Cli-fi novels will fill their pages with unrelenting horror. As the author of a published Cli-fi novel, I am certainly guilty myself so I suppose if you want the anger there are plenty of alternatives. Because the thing this novel does that is groundbreaking is explaining the gears of capitalism, political infighting, and in the end speculative solutions.

“The three richest people in the world possess more financial assets than all the people in the forty-eight poorest countries added together. The wealthiest one percent of the human population owns more than the bottom seventy percent.”

Science Fiction in a KSR sense is more social science than spaceships and time travel, although he has done both before. He is a hard Sci-fi writer that craves realism so in that sense this novel had to get into the weeds of how Capitalism works, pardon me, how it fails to work for the globe.

“macroeconomics was no longer so very clear on the ultimate effects of quantitative easing, given that the evidence from the past half-century could be interpreted either way. That this debate was a clear sign that macroeconomics as a field was ideological to the point of astrology was often asserted by people in all the other social sciences, but economists were still very skilled at ignoring outside criticisms of their field…”

Capitalism is killing us. It doesn’t work. It is a total failure, and going back to that quote from page 25 the point of this novel through its many threads is clear. Finding a solution will require first an admission that capitalism as we know has to end or radically change. The heart of Star Trek as a speculative story is to imagine a wagon train to the stars. The heart of Do Androids Dream of Electric Sheep is to explore a dystopia where it is not clear who or what is even human anymore. The heart of Ministry for the Future is imaging a world where capitalism ends for thinking of the earth as our home we depend on.

This is highlighted by the scene where people all over the world decide organically to celebrate Gaia day each year. Seems an impossible feat in a world where the day after thanksgiving year involves people get injured racing to sales on flat-screen TVs.

“But early in the twenty-first century it became clear that the planet was incapable of sustaining everyone alive at Western levels, and at that point, the richest pulled away into their fortress mansions, bought the governments or disabled them from action against them, and bolted their doors to wait it out until some poorly theorized better time, which really came down to just the remainder of their lives, and perhaps the lives of their children if they were feeling optimistic— beyond that, après moi le déluge.”

Will we shrug another warning off? Ministry for The Future is not my favorite KSR novel, and it is not my favorite read of the year. That said it is probably the most important book I read all year. The synergy of message and style won't make for the most exciting read for most.  In the narrative, there is not your typical action style plot or ticking clock. That said the ticking clock is more real in this book than a thousand thrillers, and in a meta sense you are the hero of this novel, the clock is ticking and you are the one who can save the characters in this novel. You can help your children or grandchildren avoid the lows of this novel, and to experience the highs. So I hope you readers and better yet take it to heart.

*Thanks to David Gill PKD expert who pointed who he learned this from, and confirmed on KSR’s Ezra Klein interview.