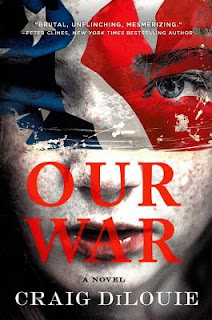 Our War By Craig DiLouie

One of my favorite genres of novels is the warning novel. 1984 and Alas Babylon are taught in schools because of what they say about authoritarianism and nuclear war. Not every novel written as a dire warning is taught in schools but I personally love sci-fi that does this.  Speculative fiction as a genre has many tricks up its sleeves but the ability to look at an oncoming disaster and dramatize it is the very best reason to write it. We can debate that point, it is subjective but I think the argument is strong to almost be objective truth. Warning novels are important. So like Sinclair Lewis It Can’t Happen here felt like a well-timed warning 90 years after it was published.

With Our War, Craig DiLouie was put in an uncomfortable place as the author of a warning novel that appeared to be coming true on January 6th, 2021. When right-wing seditionists tried to start the very conflict, he warned about it. I told you so’s from an author safely north of the border don’t make for the most natural book promotion but if the target audience is me – sold. I can relate to DiLouie’s situation as I am the author of a climate change warning novel (Ring of Fire) about wildfires I have had to debate often if I should hold my tongue or look callous promoting it.

That was not the only reason why I jumped on this book as it was also set 53 miles from my hometown in Indianapolis. It is a city I have spent lots of time in so the idea of a Second American civil war novel that was about the battle of Indianapolis had me curious. I will say I had to divorce some of my knowledge of Indy while reading this book but that is not the author's fault and should not affect most readers.

Our War released in 2019, probably written directly in the middle of the Trump years is a solid warning novel. It is about a President who after he is impeached refuses to leave office. I know it sounds familiar. Many of the events mirror reality, President Marsh’s followers in the book get a little further and many blue cities in red states become battlegrounds.

Like many great war novels, Our War follows many different POVs. The narrative is structured in a smart way to balance parallels in the storytelling. Hannah is what I would consider the most important character, she is a ten-year girl left homeless after her parents are killed and she is separated from her brother Alex. She ends joining the Free Women a group of leftist resistance fighters, and of course, Alex ends up fighting with the right-wing militia. They were too young to have ideals before the war started and Dilouie uses these characters to highlight how both sides form their ranks. It is a trope of civil war fiction the family is torn apart and facing off in the war, but in this case, it is important and done well.

The adult characters have plenty of meaningful parallels as well. Including Abigail whose ex-husband fights for the other side. Gabrielle is a French-Canadian worker for UNICEF looking for evidence of child soldiers in Indianapolis. She befriends a local reporter a black journalist named Audrey. On the right side of the conflict, we have Mitch who believes he is on the right side of history, despite my feelings as a leftist myself I was glad he was not painted as mustache-twirling and given his logic for his actions. In many senses, he had more regrets than the liberals about who was fighting on his behalf.

In hindsight, Our War might not seem prophetic but honestly how many of us thought we would see the supporters of a sitting president under his direction storm the capital and try to stop the transfer of power. Well apparently, this Canadian Journalist turned author primarily known for writing horror novels did. He will join fellow Canadian Journalist turned author of The American War Omar El Akkad who wrote disturbing American Civil  War novels.

Two very different books, Our War goes less into the future, and Akkad was trying to reflect the madness our country caused in the middle east by reflecting it back. Our War is about the bi-partisan conflict here and now. It is easy to point the finger exactly to the roots.

“Social media had promised to bring people together but only helped polarize them along new tribes isolated in separate echo chambers.”

It can seem dehumanizing and like a video game when it is a battle of names and profile avatars but Our War seeks to explore this conflict spilling into the streets.  To take the rhetoric that nebulous when written in comments on Facebook and Twitter and put the conflict into the real world. The narrative is helped by Indianapolis losing power and being cut off from the rest of the country. Otherwise, the conflict probably would have been live-streamed and posted all over. That is one aspect DiLouie missed, the nut bags live streaming putting their feet up on the speaker’s desk and recording for the FBI their acts of sedition is so modern treason but that is the reality. I can see why Dilouie chooses not to focus on that. It wasn’t the point.

As for the role of Indianapolis.  I had to divorce my knowledge of Indiana a little bit. It is clear that Dilouie did his research…

“Indy was a blue city, in a sea of Red. At the start of the war, the militias had gained control of the countryside easy enough. They’d roll into town, find out who was in local government, make some changes. None of it was planned. It just happened, a nationwide protest that snowballed into a revolution.”

There is a difference between reading, researching, or even visiting a place and knowing it. Why is Indianapolis a blue city in a sea of red? A couple of reasons, and while there are some progressive artist types on the north that is not the main reason. A huge aspect of Indianapolis overlooked here is the large African-American population. I know from organizing a little in the city that the community is somewhat dubious of young white progressives.  That should not bother readers, not from Indiana. That said the black community being underrepresented in the story is the one and only real knock against this novel for me.

I think this novel should be read because it is warning about violent partisanship. That message is more important than the details of the story.

The Brother and Sister's storyline is at the heart of this novel. It is the emotional core as much as it drives a huge chunk of the story. Hannah and Alex were relatable characters who represent a very important class of Americans. Not everyone feels perfectly represented by Democrats and Republicans, but our stupid system only lets citizens choose between Coke and Pepsi. You can’t escape it.

That seems to be the warning of Our War. It is where all the hatred and partisanship go if left to fester.  The woman shot storming the capital was Q conspiracy nutbag but she was from our neighborhood in San Diego. The local news interviewed her mourning family. Her grandfather who didn’t share her views lost a loved one to the crazy partisanship as much as the bullet that tore through her.

This is where the novel addresses that issue, I think is not getting enough attention right now. Can we forgive the president and party who caused this because Trump and Ted Cruz were not shy about stoking these flames? Hannah a ten-year-old in the book brings it up. “Sabrina said they should be punished. She said there’s no going back after this, no living with them again. Not after what they have done.”

“I can see her point they declared war on reality and elected a maniac who almost broke the country. When he failed, they rose up and broke it themselves. You can’t reason with them, and they hate our guts.”

They declared war on reality. Can anyone really argue this didn’t actually happen?  In the case of Our War the ultimate result is open warfare, and don’t assume because Trump lost this time that this novel won't be relevant again someday. This is a great warning novel, worthy of your eyeballs and attention.

I did want to comment on something that I consider spoilers.

“This is no place for a child.”
“I’m not forcing her to do anything,” The woman said “I don’t like it either. But after what she has suffered, she can make her own choices.”

“You see a child,”Rafael said. In some ways, she is as old as you.”

And later this results in the most powerful moment of the book.

Hannah Miller knelt on the debris-strewn floor amid shredded bodies, staring into space and hugging her brother’s body.
Something inside Mitch broke.

Mitch has a chance at this point to kill Hannah. She blew up a squad of his men and with it her brother. Mitch points his rifle and can’t do it. She is just a child who is already suffering because she killed her brother. This is the moment of ultimate partisanship taken to its most awful extremes.  I enjoyed the fact that while DiLouie appears sympathetic to the left throughout the book at this moment he gives logic and strength of character to Mitch. Alex has a chance to kill his sister and can’t. Hannah is the one who ends up killing her brother and is wracked with guilt. Mitch sees the horror of all this at that moment. Powerful stuff. Excited to talk to Craig about these scenes when I interview him for my podcast so stay tuned for that…

Posted by David Agranoff at 7:54 AM