Book Review: My Heart Is a Chainsaw by Stephen Graham Jones 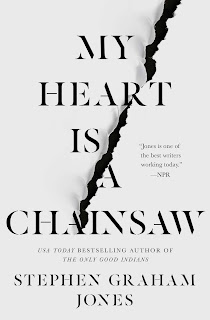 I was worried when I reviewed the Only Good Indian that I was drifting into hyperbole. It was my top read of the year, Jeremy Robert Johnson and I took time out of HIS interview to proclaim the NEED to throw all the awards at the book.  The amount that I love that novel and Mongrels is hard to chart honestly. On a 5-star scale, it was a twelve if I could give that novel all the missing stars from all four and three stars books I read in those years I would have. Those books are not the only genius but they affected me deeply as I read them.

Stephen Graham Jones is an author who I like as a person and a storyteller. The hardest part of reviewing his books is not using hyperbole because he is so goddamn great. Here is the funny thing I did not like My Heart is A Chainsaw nearly as much as the last three SGJ books I read but that is in part because of the impossibly high bar this dude has set.

Mongrels worked in part because it was a love letter to werewolf movies, novels, and myths. I love stories about werewolves but I am not a slasher fan. This book actually is the thing that taught me that. My Heart is a Chainsaw is the love letter wrapped inside of socially aware horror novel. It is clear on almost every page of this book that the only person more in love with slasher movies than Stephen Graham Jones is our main POV Jennifer Daniels AKA Jade.

Jade is a teenager in Proofrock Idaho, a small town in transition just like Jade herself. While she has just graduated (one class to finish) a new community of rich and famous people called Terra Nova is opening across the lake from her. Jade has knowledge of Slasher movies that would make IMDB jealous so when two European tourists die in the nearby Indian Lake she is convinced it is the work of the killer sure to rise.

I have read a few of the early reviews of this book and I am wondering if the majority of the early readers are missing the point. Maybe I am missing the point? But let me tell you what I think is going on without spoiling the fun. Jade is half-Indian and while it can be easy to get lost in the horror elements this novel is a subtle take on her Indian experience in America. I don’t know if academics will be able to divorce the slasher aspects to think of this novel that way but it is all done with graceful touches. I don’t think they can miss the point but sometimes SGJ operates in that space that floats just over some reader’s heads.

A good portion of the book is a third-person narrative, but many of the most important moments are written by Jade herself in the last assignments she needs to graduate. A series of history reports for her favorite teacher Mr. Holmes. Taking the age-old writing advice, she writes what she knows and her subject a mix of Slasher movies and observations about the town.

These Slasher 101 reports appear in the book in a different font that might seem like asides about movies that can be skipped. DO NOT DO THAT, they are very important. Jade is dissecting the history of her hometown while trying to explain the history of these movies. As she writes these reports she makes connections, who is the final girl in the narrative of her town, who has the motivation to become a slasher, and can she solve the mystery in time?

There comes a point when Jade realizes “She’s not supposed to figure it out yet.” The movies have structure and she knows it like the back of her hand. She doesn’t want to get ahead of it. Even when her Dad bags up all her movies in a not-so-subtle order to trash the shit but she is undeterred. The cops are on to her and some of my favorite parts of the book are when she interacts with the sheriff or his department. When she gets locked up by the sheriff. She demands to know what she is being charged with. When she calls to report her findings the sheriff has warned his people to expect her call.

It is a funny scene but it is important. Jade will tell you the cops are always morons and not helpful in a slasher movie. I am just not sure you can trust Jade when it is Stephen Graham Jones who is telling the story. His novella last year Night of the Mannequins was a narrative sleight of hand and you should understand that nothing in this book is at face value.

I promise I will not tell you any more about the story but at this point, I am going to speculate on the theme. I have no idea if I am right or wrong but the title is so important.  You can’t trust your heart, feelings that come from the heart, not the brain can lead us in the wrong direction.

The prologue is a beautiful tribute to a short story that SGJ and I both gushed about in the interview I did on my podcast for the Only Good Indian. That classic story was foundational for me as well, and that knowledge changed how I viewed the book. The clues were there but Jade was getting the wrong messages. She was watching the wrong movies. Is the scene with the slasher movies in the trash bag on her bed more important than it seems? Her dad is hardly a dad, he takes this action and doesn’t talk to Jade about it. I think this is a scene and the father's absence is something you should pay attention to, but again I may be wrong.

All sounds amazing, right? It is awesome but one thing held this reader back. It is not you 'My Heart is a Chainsaw' it is me. Slashers are not my favorite genre of horror. The only reservation I have with the book is the references to Slasher movies started to overwhelm me.

I mean I have seen them; I am a horror guy so I know Twitch of the Death Nerve/Bay of Blood. I get most of the in-jokes about Black Christmas, Trick or Treat and Nightmare on Elm Street. I just don’t love this genre nearly as much as SGJ does and for that reason, it didn’t knock my socks off like the last two books.

Your mileage will and should vary. This is totally on me and my high bar. The reality is My Heart is Chainsaw is an absolute genius piece of work. The concept of a novel doing meta-exploration of Scream doing meta-exploration of the genre should not work as well as it does if it were not for SGJ’s skills. Witty moments and next-level prose cut through the concept that didn’t do much for me. I can’t read SGJ’s work fast because there are moments and details that are both subtle and profound. If you zoom through it, you’ll miss it. If you give Jones the attention there are rewards on almost every page.   I mean enjoy asides about raccoons being nature’s janitors as the major social and political themes the cool thing is you’ll get both.

The interview on Apple podcasts

Posted by David Agranoff at 8:03 AM

I am still reading this one. I am just over halfway through it, and I understand where you are coming from. I am struggling. Like you, The Only Good Indians was at the top of my list last year, but I have so many hot and cold feelings about this one. There is no doubt that it is well written and superbly crafted, but I feel that the author's love of the slasher is much greater than my own. It is also evident just how much he does love them. I can say one thing, I am learning a LOT about them, so there is that.