Book Review: Skyrmion: Book One of the Sweetland Quartet by Duane Poncy 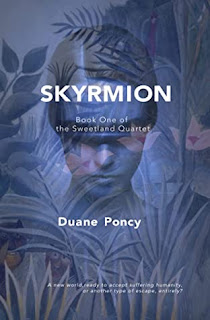 Skyrmion: Book One of the Sweetland Quartet
by Duane Poncy

I have no idea how to say the title of this book and the spelling hurts my dyslexic brain just thinking of it. I going to resist just calling it Sweetland as I did in my head. This is a really interesting book and calling it Sweetland might make it sound like a generic Candyland rip-off but this book is far from that. It is a strange book that kinda fits into different genres here and there but there is no simple all-encompassing genre. It is dystopian, it is cyberpunk, and at times it is CLI-FI. It is science fiction but at times surreal and at other times more grounded. At the heart that grounding comes mostly from a father and daughter relationship that drives the main narrative forward.

Duane Poncy is a name I was familiar with knowing that he was a Portland writer but this is the first of his works that I really dove into. It is well written that does make the best SF does – using the future to talk about today.  So for those who want a basic non-spoiler review before the serious breakdown begins…

Skyrmion is the kind of Science Fiction novel that the independent press is here for. While it might not be the most commercial of works it hit plenty of buttons for me. The sad state of publishing means that a doesn’t tick a few narrow boxes is of interest to mainstream publishers. Thanks to indies and the democratizing force of small presses and small publishing we are lucky to get books like this.

The world-building is top-notch, the main character Joe Larivee and his relationship with his daughter carried me deep into the narrative, and the concept was fascinating. I was interested through the whole book, even if I got a little bogged in the middle. The only drawback is I think a good 50-70 pages could have been trimmed, but I am mostly nitpicking. It is a four-star book to me, a really good example of the importance of small or independent presses.

I enjoyed this book, and now let’s get into it. I went into this book absolutely blind on the topic. I knew nothing of the story, plot, or anything of that nature. So, I was pleasantly surprised that it took place in Portland, a city I lived in for 7 years, and had just visited a few days before starting this book.  I suppose I forgot Duane Poncy lived that. Regardless this is the first future Portland book I have read since Edward Morris's excellent first Blackguard book.

“It was one of her rituals, paying homage to her childhood memories of the city that once existed.

She recalled the vast urban forest that once populated Portland when everything greened in early spring, the dogwoods, and cherry blooming, Dad walking her to school along sidewalks covered in a magic carpet of pink and white petals;…”

Later on this page, the character explains the die-offs and changes around Portland. I started to see coming back to Portland after a few years was a trip.  As beautiful as Portland still is I can see the fears, residents have for the path and how the world will handle the warming future. I saw fewer bikes and more cars. Portland is changing, as a microcosm for our climate crisis Skyrmion carefully and patiently paints a world of the future when most people have sacrificed reality for trans-reality and fake living.

One of the strengths of this novel is how it blends technology with the surreal and spiritual nature of the human species transcending the mess we made.  Consider this paragraph that weaves these vibes.

“Some anomaly had struck him as he scrolled by. Someone had written stealth coding to spare certain nodes. Dark Matter hidden in Grid’s fabric an elusive Skyrion he wondered what hypothetical magnetic particle played in the scheme if any. It was likely nothing more than a code name.”

These are elements and vibes throughout this novel that really gave the book a special vibe. We have read stories of sim worlds or transports like Stargate. We have seen that before, but this novel will not remind you of those books. It has its own thing. The novel doesn’t beat you over the head with the misery of this future just gives you a lived-in feeling.

None of the setting or ideas would mean anything if we didn’t have anyone to care about. Jim and his daughter Jessie are the heart. As a career social worker, Jim is in an interesting place to interact with the narrative and drive the story.  They live in a future where it is understandable that most want to crawl into sim-worlds as real life is miserable. The conflict comes for Jim when his daughter wants to emigrate not just to a sim, but to another world. Sweetland is thought to be just another sim at first but it is more. A totally alien world an unknown location where people are transferring their mind/soul to meet a copy of their bodies.

“Dad, do you know about Sweetland?”
She didn’t wait for him to answer. “I’m going to sweetland.”
“Baby, there is no Sweetland.”
“Yes, there is, Dad. I’m Going and I want you to go with me. There is no future left here.”
Jim is not sure that is a sim, a real planet or just a bullshit cult.

This is the question at the heart of the novel. Poncy does well to hook this Sweetland idea in the heart of this teenager. It feels very natural that a child living in a hopeless time would latch to this without fully understanding. As a reader, the mystery is answered just enough to set up another story.

“You mean it is not in Bolivia?”
“It’s another world, Ms. Deluna.”
“You mean like another planet. Like in another galaxy or something? Or do you mean a sim world? Because I don’t think I can survive in a sim world.”
“We haven’t figured out exactly where Sweetland is – not in relationship to earth. The scientists will tell you about quantum transference, and string theory, all of that, but nothing in Sweetland’s sky is familiar to us. The only way to convince you is to show you.”

In that sense, this book almost feels like an origin story or a prequel to an even grander adventure. I admit when I saw book one on the cover I was a bit skeptical. Doing that on a book adds so much weight to a narrative. I am not looking at these books as stories but as opening salvos. Now I am judging a book by the ability to draw me back. The main reason I want to come back is how very different a second would be.  Promising four books is a little James Cameron Avatar to me, but that is not a bad thing for me. It is bold as hell. Poncy has my attention for book two.

PS on a side note for my Dickheads this part was super PKD and gave me a chuckle...
“The directory was huge, taking up much of the wall. Joe scanned the names of various offices. “Office of Crushed Dreams. Office of Delusions. Office of Rationalizations. Office of Mental Acrobatics.”

Posted by David Agranoff at 7:41 AM