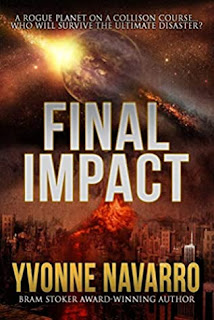 Mass Market Paperback, 480 pages
Published January 1997 by Random House Publishing Group
This was a very interesting read for me. Navarro is an author I have been long overdue to read and this is a long time coming. I had the sequel to this novel Red Shadows on my shelf for years and had been searching for the first book forever. It was last year that I decided enough was enough and I ordered a beat up copy of the mass market paperback. I assume this was a first edition.
Interesting that Goodreads had no image of the cover on my book. Oh well.
I want to say something off the bat because I don't want to be misunderstood. Navarro is a hell of a writer and any problems book had were mostly on me. I have to admit this book was not exactly the book I was hoping for. Weird end of the world novels are my absolute favorites. I first discovered the book through finding the sequel at Powell's about a decade ago. A novel set in the aftermath of a rogue planet breaking apart and running into Earth in orbit is my jam.
The problem for me is Final Impact doesn't become that book until 300 pages in. When we get there it was fantastic and everything I wanted. That is not to say the first 300 pages were not good, Navarro is gifted writer who did an excellent job weaving characters together. Even though it wasn't the story I wanted I was never bored.
The pitch for was probably something to the effect of Deep Impact meets the Stand. The first 2/3 of the book is focused on a set of characters who seem to be developing magical powers as the world enters the last phase before this disaster. This was the majority of the novel, it was all well done and interesting for the most part - it just wasn't what I was looking for in this book.
It is a tricky thing narrative wise, in supernatural or science fiction it is generally hard to have more than one fantastical element in a story. Having both a rogue planet breaking part and coming destroy civilization is one fantastical element, and since It had been more than a year since I read the back cover and put this book in the TBR I was confused and surprised when characters were getting magical powers.
The Stand is a rare case that has the pandemic and the spiritual quest, but I think that works because it is subtle and not introduced until the novel devastates us for hundreds of pages. The powers of these characters are the story for the majority of the first 300 pages.
In that sense Final Impact feels like two novels, both are well written and engaging just two different stories. Look I understand how and why the first part sets up the second part but it just didn't work for me. The last act however was very powerful and the best thing I can say about the book is that I am excited to read the sequel at some point later in the year.
Posted by David Agranoff at 1:14 PM