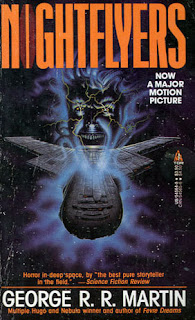 Mass Market Paperback, 295 pages Published November 15th 1987 by Tor Books (first published 1985) Literary Awards: Hugo Award Nominee for Best Novella (1981) This will be short as I am just reviewing the novella. I wanted to re-read this classic as the SYFY channel is set to turn it into a series soon. When I was young there was a direct to video movie made based on this novella. Now the cover of the books says a "Major motion picture." Major may be a strong word to use as the most famous person involved in the production was Catherine Mary Stewart. Doesn't ring a bell? If you are my age you'd know her as the Last Starfighter's girlfriend or the lead in the weird zombie movie Night of the Comet. That reminds me I need to see Night of the Comet again - because I am sure it will totally live up to my memory. As cool and amazing of an idea as Nightflyers was, this movie did not have the budget or the resources to pull it off. This movie is the reason I bought this paperback in the day and read George Martin decades before HBO launched him to the point that he became a SNL character. So SYFY channel being in the George RR Martin business makes sense. The thing that makes the most sense about it is that at 104 pages Nightflyers just scratches the surface of the ideas contained. Written in 1978 I am assuming GRRM just was not at the point of writing sprawling epics yet. It is a story that can and should be expanded. This is a masterpiece of blending Science Fiction and horror. Long before event horizon Martin crafted a perfect deep space haunted house. The Nightflyer is haunted by ghost but in true genre blending fashion the ghost inhabits the AI at the heart of the ship. Royd is the captain but his relationship with his vessel is more like Norman Bates and his mother. While Martin manged to seed these horror tropes he also does the work of far future world building. in 104 pages a full universe is built and very different human culture is ripe for exploring. It is amazing to know this was written during The Carter administration and holds up perfectly story wise. The biggest negative the sexual nature of the female characters are male nerd fantasy bullshit. Considering how Rapey Game of Thrones is this made me more uncomfortable, I hope SYFY ejects that aspects of Karoly. Over all Nightflyers is a must read Sci-fi classic that should be read as is before the TV show changes our perceptions of it.
Posted by David Agranoff at 10:05 AM

Good post. I study something tougher on completely different blogs everyday. It'll at all times be stimulating to read content from different writers and follow a little bit something from their store. I’d choose to make use of some with the content material on my weblog whether you don’t mind. Natually I’ll provide you with a hyperlink on your net blog. Thanks for sharing. casino games