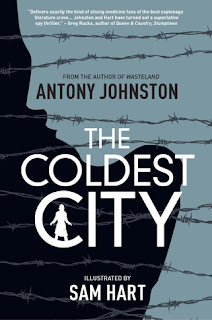 Hardcover, 176 pages Published May 16th 2012 by Oni Press After hearing the author of this graphic novel on an episode of This is horror" I decided I wanted to read this book and re-watch the movie. I am super glad I did. This is a good example of the same story told in two different ways that both work. I think over all I like the movie a little better than the source material and as rare as that it is clear. The graphic novel is black and white and the simple art works well for this story. The non-linear story telling was used to perfect effect. I think the story might come off a little too slow for some readers looking for an action story. but if you know the era and get into the characters the tension is thick. I want read more more of Johnston's comic work. The movie is Atomic Blonde a super stupid title but I admit The Coldest City works better for the book than a Charlize Theron action movie. While the movie is a cross between Tinker Tailor Solider Spy and a Bourne movie, the book is pure spy story. It has the same framing device of the after action interrogation scene. But the book is all about the verbal and story telling cat and mouse. The action is all a creation of the film makers. That is not to say it is the only difference between the two, just the most obvious. The action scenes are brutal and top notch, they also don't shy away from the aftermath. Theron's beaten and bruised as the movie continues. That was interesting and something more action movies should do. The other amazing thing about the movie was the 80's soundtrack that included Ministry and Siouxsie and the Banshees. The music was not perfect but pretty great.
Posted by David Agranoff at 7:34 AM

Great graphic novel! If you loved the movie "Atomic Blonde" this book will give you even more to think about and enjoy!