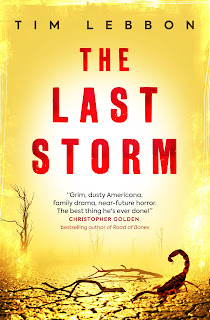 The Last Storm by Tim Lebbon

Tim Lebbon is one of those writers for me that I trust.  The dude knows what the hell he is doing telling a story, building worlds and characters. The novel that won me over was The Silence that in 2015 was my favorite read of that year. While I was disappointed by A Quiet Place (when I saw the trailer I thought when did The Silence cast Emily Blunt?), the movie The Silence was a valiant attempt but for this fan of the novel, I just couldn’t go there. For real seven years after reading The Silence there are scenes that still haunt me. What did I say at the time…

“This novel is in the tradition of British dystopias ranging from Day of the Triffids to 28 Days Later. The Silence is a high-concept monster novel that creates terror in the reader by milking every drop of the idea. There is a moment 2/3 of the way through the narrative that was the most brutal scene I have experienced since the ending of the Mist. I knew this scene was coming, it was obvious and Lebbon gave the reader plenty of warnings. Despite all the warnings reading it still hit me like a gut punch.”

We are not here to talk about The Silence, as Tim Lebbon has a new novel called The Last Storm, but I wanted to highlight the moment I fell into the hands of this storyteller. I was lucky enough to get an advanced copy as Tim is coming on the podcast, but my interest is high as a huge fan of Cli-fi, climate, and environmental horror. I mean I was nominated for the Splatterpunk award for best novel for my entry into the sub-genre with Ring of Fire. I am passionate about this sub-genre.

The sustainability of earth is my most gnawing personal fear, many of my favorite most disturbing reads include The 60s Ballard novels eco-horror novels, The Sheep Look Up by John Brunner, or The Bridge by Skipp and Spector. Stuff like that. I had to read this one. Somehow his novel Eden escaped me, I will fix that. Thank you to Tim for sending me this one and coming on the pod. (Recording soon)

The Last Storm takes the climate horror in an exciting new direction. It seems like it could possibly be in the same universe as Eden but I am not sure about that. Lebbon has always been a writer who was good at using the family dynamic to build and maintain suspense. I get the feeling that environmental fears are becoming a theme for this horror writer and of course, I think it is natural.
One of my favorite reads last year was John Shirley’s underrated Cli-fi novel Stormland. It took very modern climate fears – unending hurricane seasons and combined what he does best by adding Cyberpunk elements. It is a great novel. Lebbon does a similar trick here, by writing about a brutal climate future and giving it a personal spin. The family dynamic and some cosmic horror beasties. This was a bit shocking for me as I went in only knowing “Climate horror- Tim Leboon” (I was sold right there)

I admit for some reason I was expecting a cold realistic post-apocalypse drama like The Road. My fault. Regardless this novel is a supernatural horror novel set against an American dust bowl that is our future if we don’t start making changes. The narrative follows multiple points of view, and the rhythm of how we go from character to character is perfect. My only real nitpick is using first person in multiple points of view book sometimes takes me out of a story reading me I am reading a book. For the most part, the story and writing are strong enough that I was lost in the story, but I don’t think this will affect most readers.

Jesse is the character I would consider our main point of view. As the story really starts with him. He is living alone in the desert. He inherited an ability that makes him a folk hero in this future. He has the power to make rain appear, and this power had me thinking we were getting something like the John Farris novel The Fury or King’s Firestarter meets McCarthy’s The Road, and I wasn’t that far off.

In this world the rainmakers have become almost mythical, reports on the internet and TV have made these people mythical. Jesse and his (ex)wife Karina scattered after one of the storms Jesse made caused destruction that included their lost daughter Ash who they believed dead. We also meet Jimi who is a soaker, who collects and sells water. He hates Jesse whose storm really messed with him. He has been seeking him for revenge. This all comes to head when Karina thinks she has seen Ash on a video and their daughter is alive and starting to make rain, this means as she grows stronger, she will eventually bring the monsters. The race is on to find Ash.

The dynamic that being a rainmaker sets up in this world is fascinating, because why wouldn’t they just bring the earth back? The problem is this magic is supernatural, the price is high. It is painful and dangerous, and in the end, it actually opens holes to other worlds filled with monsters.  That is where the cosmic horror comes in. I love the idea of the slow dusty painful climate death that creeps by inches across a dying landscape versus the wet madness of the storm hiding a dread from another reality.

Lebbon has a reputation for writing horror, but he has written lots of science fiction, even if much of that is for media tie-in franchises. He does a wonderful job with the world-building. One thing I really liked is this rare case of a post-apocalypse, that still has parks, phones, TV, cars, and the internet.

“The park itself is marked by drought. Grass is dead. A large pond contains a mere puddle of muddy water, and a few scruffy ducks pad across its oily surface. Hardy trees persist here and there, but planting beds are home to cacti and a few swathes of invasive devil grass. Even in the city people are fighting against the painful truth of change. They don’t call it the climate crisis anymore, or global warming, or any other name that might have once have been used to urge positive action. Now, this was the norm.”

When I read a book, I dog-ear pages I want to talk about in my reviews, and in this case, most of the things I took note of were world-building, but so much of the horror of this world is the novel and a glimpse into our future. Lebbon gives us a supernatural thriller but the bones are built on the speculative horror of this future.

“The fire raged across the desert after starting in scrubland.  There are a thousand ways for such a blaze to begin: sun shining through on to a scatter of dried plants; sparks from a passing vehicle; Sometimes it’s intentional. On a landscape fried dry by terrible drought and baked day after day by a merciless sun. Fire was a demon that stalked from place to place, searching for where to settle its blazing roots.”

I want to also point out that the prose is some of Lebbon’s best. Not flowery at all but perfectly calibrated for the story giving moments of dark beauty. Several chapters end with powerful moments that hit hard. “Eight in the morning, clear sky, already ninety degrees in the shade, the world was nothing like it had been yesterday.”

That weather report is an important detail. These powerful chapter-ending shots are throughout the novel. Perfectly timed cliffhangers and gut punches at the end of chapters keep you reading.
Before I write about spoilers let me just say that I loved this novel, and had fun reading it. Like many novels the more I thought about it. I enjoyed elements I missed in my first reading. So I recommend this book for fans of SF climate horror hybrids. Tim Lebbon fans will be there. I still think the silence is a better novel to start one, but both are great.

The Last Storm is a CLI-FI novel, it has effective world-building, but it also has rich characters, and as Lebbon does so well there is a strong family dynamic. Jessie and Ash are tragic figures who have such important talents but it ends up being a curse.  This is a powerful story on many levels as a piece of science fiction it would be easy to focus on the dynamic of the rainmakers and the allegory they represent in the drought-stricken future. That is the heart of the story part of the story.

Besides being a fun Slayer reference, this is the price that rainmakers makers pay. It is the fear Ash’s family lives with. What do the creatures falling in the raining blood represent? “The fires are closing, a glimpse of hell in the rear-view mirror. The wipers smeared blood, and for the first time he wondered where it all came from, and the pain that must be suffered there to make so much.”

They represent but the ghosts of the world we have killed off. The price of returning the water to our world is the ghosts of the world humanity has killed off. The best kind of science fiction uses the future to reflect on how we live our lives today. The sad reality is it is harder and harder to write a novel about the future without grim, dark horror. This novel is a cross-genre classic. Science Fiction horror at its finest.